A tremendous variety of physical phenomena involve turbulence, such as bird and airplane flight, propulsion of fish and boats, sailing, and even galaxy formation. Turbulent flow is characterized by chaotic swirling movements that vary widely in size, from sub-millimeters, over the extent of storm clouds, to phenomena on a galactic scale. The interaction of the chaotic movements on different scales makes it very challenging to simulate and understand the underlying geometric structures within turbulent flows. At the same time understanding these fundamental patterns is crucial for industry to optimize a wide range of applications.

Turbulent thermal convection is a class of turbulent flows in which temperature differences drive the flow. Prime examples are convection in the atmosphere, the thermocline circulation in the oceans, heating and ventilation in buildings, or in industrial processes. The model system for turbulent thermal convection is Rayleigh-Bénard flow in which a layer of fluid is heated from below and cooled from above. The temperature difference between the two plates leads to the formation of a large-scale flow pattern in which hot fluid moves up on one side, while cold fluid moves down on the other side of the cell. The beauty of the Rayleigh-Bénard system is that it is mathematically very well defined. This feature allows direct comparison of simulation results with theory, and one-to-one comparison with state of the art laboratory experiments. As a result, for more than a century, Rayleigh-Bénard convection has been the perfect playground to develop novel experimental and simulation techniques in fluid dynamics that enable a better understanding of underlying turbulent flow structures.

According to the classical view on turbulence, strong turbulent fluctuations should ensure that the effect of the system geometry on the turbulent flow structures is minimal in highly turbulent flows as the entire phase space is explored statistically. This view justifies the use of small aspect ratio, i.e. small horizontal length compared to its height, domains when studying very turbulent flows. This massively reduces the experimental or simulation cost to reach the high Rayleigh number, which indicates the dimensionless temperature difference between the bottom and top plate, regime relevant for industrial applications and astrophysical and geophysical phenomena. Therefore, in a quest to study Rayleigh-Bénard convection at ever increasing Rayleigh, most experiments and simulations have focused on small aspect ratio cells in which the horizontal domain size is small compared to its height. This approach has resulted in major developments in our understanding of heat transfer in turbulent flows.

However, while heat transfer in industrial applications occurs in confined systems, many natural instances of convection take place in horizontally extended systems. Previous experiments and simulations at relatively low Rayleigh have shown that large scale horizontal flow patterns can emerge. Motivated by major advances in computational capabilities we performed simulations for very large aspect ratio Rayleigh-Bénard convection at high Rayleigh using AFiD, a highly parallelized open source solver for fluid dynamics. Our simulations reveal that, in contrast to views from classical theories, that turbulent thermal superstructures survive in fully turbulent flows, see figure 1. It turns out that these thermal superstructures have a profound influence on the heat transfer. An intriguing, and still unexplained, result is that the heat transfer becomes independent of the system size before the flow structures become independent of the system geometry, which will require further research. We hope that the discovery of these thermal superstructures will allow us to gain better insight into the mechanism that drives large scale flow organization in astrophysical and geophysical systems such as cloud formation in the Earth’s atmosphere. 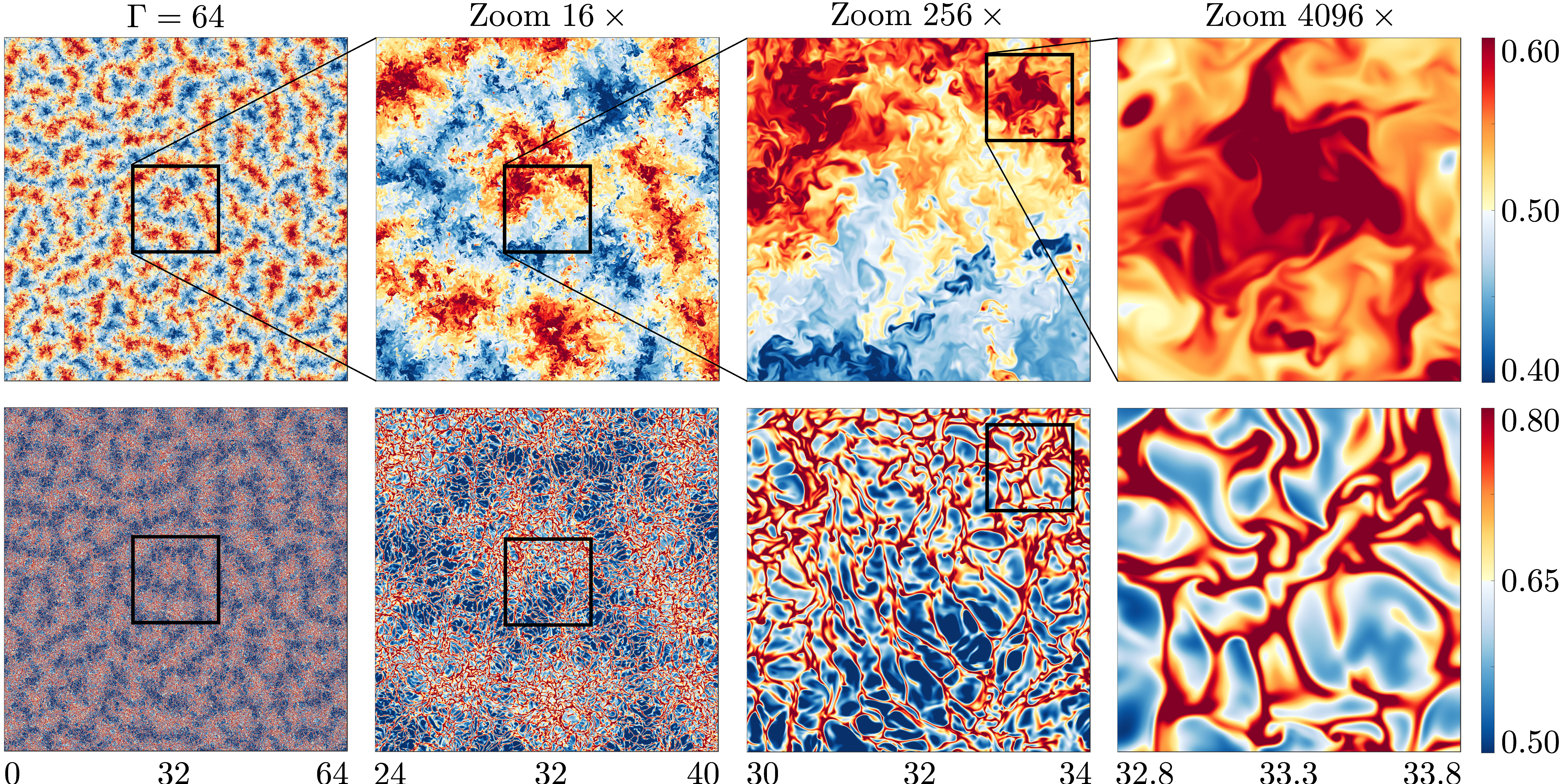 Figure 1: Snapshots of the temperature field in a horizontal domain that is 64 times as long as the domain height. The columns from left to right show successive zooms of the area indicated in the black box. The upper panels show the flow structure close to the bottom plate where small hot thermal plumes carry away the heat, while the lower panels reveal the large-scale flow patterns formed in the center of the domain.